You are here: Home / Travel Lores / The Babadham Pilgrimage

It was the wet monsoon month of Shravan and there was much excitement in our village. Several of us had gathered at the house of Jamuna Prasad, also known as Vakil Saheb. He was a freedom fighter and great grandfather of Kedar and Siddharth., We often gather there simply to talk and share anecdotes over many cups of tea. But this was special and some of us decided to undertake the Pilgrimage (Yatra) to Babadham.

A few days later I reached the banks of the Ganga at Sultanpur which is in eastern Bihar. From here pilgrims collect the holy water (jal) of the Ganga (Gangajal) in a pot and trek barefoot over the next 4 to 5 days and 110 km to Baijnath Dham also called Babadham and offer Gangajal to the ancient Shiva Linga. 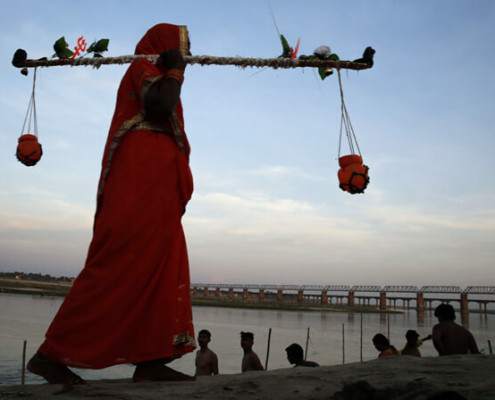 Sidddharth’s mother Sarojji had informed me that the Linga is so ancient that with countless water offerings it has denuded away almost completely – perpetually submerged in Gangajal you can barely feel its mound.

We started on Monday and barely covered 20 km on the first day. It was exhausting in the humid sun and, since we walked barefoot, my feet were sore. There were stalls every half a kilometre or so and many had makeshift provisions to rest for the night. We had carried our pots and pans and survived on Satto flour and rice ocaasionally buying some vegetables locally. The trek is by definition low cost.

Aided by a cool breeze and a mild drizzle the next day we walked more say some 30 km or so. But our feet were very sore, and little did I realize what was to come the next day. There is a long uphill trek and on its path are embedddedpointed stones which you cannot avoid inspite of your best efforts. This part is aptly called “Suiya Pahad” (Needle hill). We pilgrims being Shiva devotees are called Bams. It is only with loud resolute cries of encouragement to each other (“Bam, Bam”, “Bol Bam”, “Jai Shiv Shankar”) that we made it through with our feet lacerated and bleeding. We did not go far after that and rested frequently. People try to meditate and fail, but now only the single thought of Shiva filled my mind – it was the only way to banish the exhaustion of my body, the tirednesss in my legs and stabbing pain in my feet. We were consoled by the company of hundreds of other pilgrims from all over Bihar and ocaasionally some would would forget their own pain and massage the body and legs of older pilgrims – even those whom they barely knew. There were also female pilgrims. That nite as I lay down I listened to the lisping pitter-patter of the rains for a long time. The shrill notes of the cicadas formed a background score punctuated with the occasional raucous calls of bulfrogs. The memories of these sounds provide me solace even now. 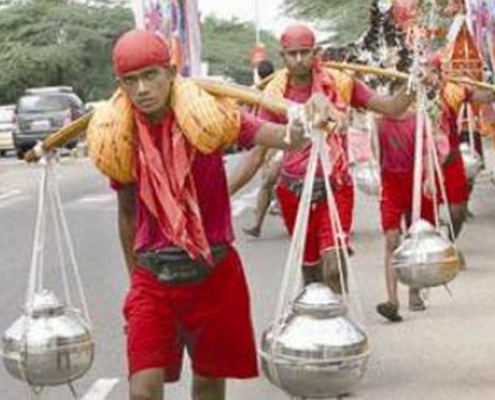 We, who do the journey in 4 -5 days are the ordinary “Bams”. There are those who do it non-stop within 24 hours and are called “Dak Bams” or Express Bams. I met one woman Bam from Muzzafurpur who does this express stuff every Monday in the month of Sawan. Then there are those who with hands joined in salutation to Lord Shiva prostrate themselves every few steps. They are called “Shastang Bams” or Prostrate Bams or “Kashti Bams” (Penance Bams) and they cover the distance in 20 days or so. Those who fall ill or tire out and are helped along by sympathising Bams are given an English name – “Damaged Bams”.Two days later we were at the end of a long queue of devotees (Bams) and waited patiently to offer Gangajal to Lord Baijnath. I spent barely a couple of minutes at the santum sanctorum but in that brief moment I experinced epiphany.

I must mention how we carried the Gangajal and our belongings.We use what is called a “kanwar”. A kanwar is a bamboo pole balanced on say the right shoulder and steadied with the right hand.

At the forward end is tied the pot of Gangajal. At the rear end is tied a bundle conatining some clothes, a pan, some food items and toileteries. It is the equivalent of the western backpack. Except that when the pilgim decides to rest he or she cannot lay the kanwar on the ground for that would be disprectful to the Gangajal which is to be offered to Lord Shiva. It is put on conveniently provided pair of forked tentpoles. Because of the kanwar we are also called “Kanwariyas”.
I am told that in the west perople take longer and difficult treks. But it is to get a sense of achivement. Why do you climb the Everest? “Because it is there”. However my trek was a pilgrmmage. It was done with humility and a sense of penance and self introspection. It is something spiritual. Siddharth’s father once told me that in America the Hopi Indian tribal people go for long runs – 80, 100 .. even 200 km! But like us it is a spiritual thing for them, and not done in a spirit of competition. I pray that in this world we replace competition with cooperation and love.

Hints: This is Kaliyug and even the Babadham pilgrimmage is not spared of the spirit of the times. It is now very crowded and with people not entirely devout. And the path gets very garbage strewn and dirty in places. I would advise you to do this trek not in the month of Sawan but say just before in Aashad when the rains have started. Or later in Bhadon or even in the winter season when there are few pilgrims and you can have quiet.

PS : The pilgrim is a Anil Mahto, who has been the caretaker of the mango orchard belonging to Kedar and Siddharth in the village of Dhararhara. He has gone a few more times after 2007. He was hoping to do this journey once with Siddhartth but Fate willed otherwise. His account above was rendered in Bhojpuri and this is the English translation.

From Gangotri to Gomukh
Scroll to top